So, you’ve not only found the love of your life, but have also tied the knot. What could possibly top that? We don’t suspect that you’ll ever have a more special day, but if there’s something that is sure to come close, it is a honeymoon in the Cotswolds.

There’s really no other part of the country that embodies romance so strongly as the Cotswolds. This area in south central England is an immaculate time warp of a place, recognised the world over on account of its gorgeous rolling countryside and endearing villages of honey-coloured stone. It’s here where you’ll find imposing stately homes, ancient market towns, enchanting manor houses and all manner of infinitely fascinating natural attractions, all within a leisurely drive of each other.

Every couple will find something to make their honeymoon in the Cotswolds truly memorable. For those who would simply like to amble through rural idylls, hand in hand with their partner, there are plenty of rolling hills, public foot paths, old growth beech woodlands and rare limestone grassland habitats to explore, befitting of an Area of Outstanding Natural Beauty (AONB).

Then, there are the seemingly endless castles, manors, villas and abbeys that are so synonymous with the Cotswolds. Cirencester Abbey, for example, was founded as an Augustinian monastery in 1117. Meanwhile, Beverston Castle is located in the village of Beverston and was founded in 1229 by Maurice de Gaunt, a lovely garden now forming part of the estate.

The many wonderful English country houses that can be discovered on a honeymoon in the Cotswolds, meanwhile, include Corsham Court, its park the work of famed English landscape architect Capability Brown, who was also a key figure behind the construction of Broadway Tower in Worcestershire. It is the Cotswolds’ second highest point after Cleeve Hill, with a base some 1,024 feet (312 metres) above sea level, and the height of the tower itself being 65 feet (20 metres).

So many more attractions like these abound in the Cotswolds, including Chedworth Roman Villa, Malmesbury Abbey and Sudeley Castle, although not all of these are necessarily open to the public all year round, so we would advise that you do your research first. Alternatively, simply investigate the wide range of package breaks in the Cotswolds available at Rosehill Travel, or enquire about a tailor-made holiday. We’ll help to ensure that your honeymoon in the Cotswolds is one never to be forgotten. 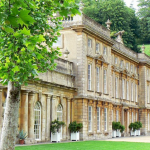 7 of the prettiest villages in England
July 14, 2022James 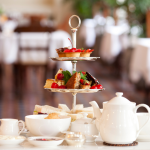 Where to find the best afternoon teas in the Cotswolds and Lake District
June 16, 2022James
Skip to toolbar